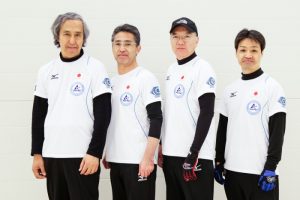 This was a close fought match with the Japanese leading 4-2 at half time and then the Irish coming back with a 1 in the 5th end and a steal of a 3 in the sixth. Japan fought back in the next two ends resulting in an extra end won by Ireland.

Coach Gordon said: “Pete had to play a great shot to win this in an extra end. 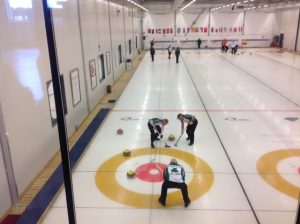 The view from the coaches’ bench

1st End – lying 2, but Pete put his first draw through, the Japanese skip, Komoda,  then wrecked on a guard, allowing Pete to draw to lie 3. Komoda, drawing against 3 but was third shot so Ireland  steal 2. 2-0
2nd End –   after an exchange of  shots,  and a couple of hit and rolls that rolled  a little too far, Komoda drew for his 2. 2-2
3rd End – Pete had to draw against 2 behind the teeline with first stone, Komoda followed this with a draw to lie shot. Things were very tight around button by this time. Pete’s last draw  had a wee bit too much running on it and Japan stole 1. 2-3
4th End – Japan were playing really well now and stole another 1.
5th End – Pete was left with an open draw to take a 1. 3-4.
6th End – Things were looking better for Ireland this time with stones in play, forcing Japan to come out and attack. Komoda was facing 3 with first stone. He hit and rolled out to leave 2 Irish stones sitting, and Pete drew to lie 3 – without last stone. Komoda, going against 3, was too heavy and Ireland stole a big three to take the score to 6-4.
7th End –  Ireland on the defensive with hits, Pete to draw to empty house behind guard. The shot was sitting out a little forcing Japan to hit and stay. 6-5.
8th End –  Plan was to keep this end tidy and open at the front 12 foot. With his first stone Pete drew to the tee lying  open. Komoda played a good freeze onto Pete’s stone. Pete has to follow but the stone was a little underswept and the game went into the extra end tied at 6-6.
9th End – At the death Japan were lying shot and guarded, forcing Pete to draw the shot under pressure. Which he duly did. 7-6 win for Ireland..
A great shot to win the game.”

This puts Ireland through to the next stage – qualifier / quarter finals depending on rankings – well done.