PJ Wilson has decided to retire from the world seniors after winning a bronze medal in Karlstad. 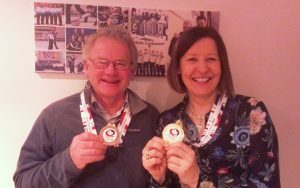 PJ and Christine pose with their world senior championships medals – bronze for Ireland and gold for Scotland.

He and his wife Anne, plus ICA President (me), were the guests of Jim and Christine Cannon last weekend to celebrate the success of Christine winning her second senior gold for Scotland and PJ winning his bronze for Ireland.

With a large glass of coca-cola in his hand (he was driving) the Irish stalwart announced: “Karlstad was my last appearance for Ireland. I have enjoyed every moment but have now decided it’s time to do other things. I started by winning a bronze world junior medal for Scotland 41 years ago and I finish with a bronze world senior medal for Ireland, so now is the perfect time to go out – at the top!

” I just want to thank all my team-mates down the years – I’ve been lucky to curl with great curlers on the ice who were also great friends off the ice.”

PJ say he will still turn out for Ireland for the Four Nations and take part in Irish bonspiels, but is now looking forward to taking things a bit easier now he’s in his 60s.

He has represented Ireland  68 times, (35 wins and 33 losses) starting at the very beginning with the European B League in Sofia, Bulgaria, in 2004 where he won silver. He was on the team at the European A League in Garmisch, Germany, in 2005,  that secured Ireland a place at the world championships, for the first and so far only time, in Lowell, USA in 2006. He was back on the ice at the European A League in Basle, Switzerland, that December, when Ireland went down to B. But he was in the team that won European B League gold in Fussen, Germany,  before skipping the team at the A league in Onskolsvik, Sweden, in 2008. He then concentrated on the Seniors, skipping Ireland at the world seniors in Minneapolis-St Paul’s, USA, in 2011. He was back as a member of Peter Wilson’s Irish senior champions at the world seniors in Fredericton, Canada, in 2013 before his bronze medal-winning swansong in Sweden last month. He also was coach to the Irish mixed doubles teams at the world championships in 2014 and 2016.

Well done and thank you Peter JD Wilson  – what a terrific servant you have been to Irish curling.