The coffin lid was finally nailed down on Team Ireland’s qualification hopes today in the match against Finland. It was tacked down after a disappointing LSD which effectively scuppered our hopes. In the match itself, it was the skips turn to catch the weight disease early on but a near freeze in the first lying four against with his last caused the Finnish skip to go safety first and a score of 2 resulted. We played much better at times during this game but the loss of a big 3 in the 4th 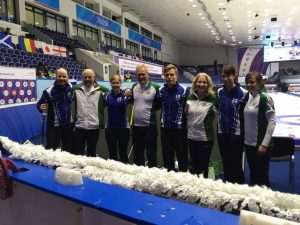 put us on the back foot again and against a very accurate striking team as the Finns were, we just couldn’t keep enough stones in play to force either a multiple score or a steal. We have one more game tomorrow at 8am (the joys) against Slovakia so it’s off to late practice tonight and then up and at them tomorrow. There is a little extra spice in this in that Slovakia and England’s relative hopes rest on the result. Win for us and England go through; lose and the Slovakians get the nod over England and Finland they think. Anyway despite all of that we will be going all out to finish on a high.