In our last game, Team Ireland stepped up to the plate against a Slovakian team that needed a victory to progress. Right from the start, we were a totally different proposition than we had been in some of our previous games-perhaps because we were able to relax with the pressure off. Having said that, we desperately wanted to win to finish on a positive note. The Barr family provided us with the hammer courtesy of a great LSD from Jacqui and off we went. We were able to control the game pretty much all the way through with the exception of the 6th end. In that end a couple of takeouts that didn’t quite work out left the Slovakians with a draw for 3 which they would never have made had it not been for their exceptional sweeping which was a feature throughout the game. It just shows what can be achieved on ice this quick with dynamic sweeping. That three left us 4-3 down after 6. A well played end in the 7th allowed Bill to draw for 2 to go one ahead 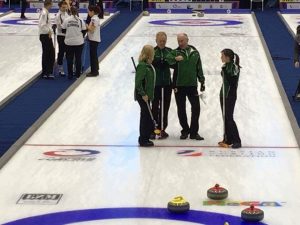 The last end played out in our favour as the Slovakians failed to clear a couple of guards and with a stone on the 4ft, the skipper was able to play a top 12 biter to force the draw which just slipped deep and the win was secure. A good end to what I think we all agreed was a frustrating campaign in that a 3-3 record would have been a satisfactory result rather than 2-4.
All in all it has been a great experience for the team to be involved in a World Competition and we have had a lot of fun as well as enjoying the serious business of the curling. We have been privileged to represent Ireland and I’m sure all look forward to the opportunity at some pint in the future. Many thanks to all for your messages of support. They were much appreciated.