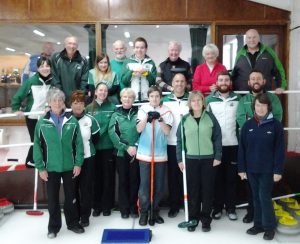 The ICA held its opening bonspiel at Greenacres Ice Rink on Sunday, October 16th. Four rinks played eight ends and there was a tie for the prizes with both Neil Fyfe’s team and James Russell’s team beating their opposition by four shots. James, playing with Marie O’Kane, Eoin McCrossan and Trish Boult, were declared the winners as they had scored more shots. 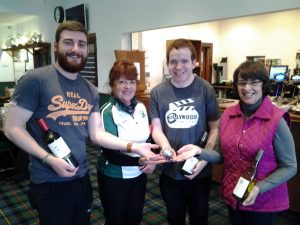 President Louise presented the perpetual trophy and the prizes afterwards and winning skip James duly thanked his rink for playing so well, and his opposition for the good game as well as thanking Carolyn Hibberd for organising the bonspiel and Greenacres staff for the ice and the soup and sandwiches afterwards.

The ICA were delighted to welcome two new members to the ranks  – Patricia ‘Trish’ Boult and Roberta Warwick.

Members also signed a get well card for Tony Tierney, who is at home recovering from cancer treatment. Everyone in the ICA wishes Tony the speediest of recoveries and that his life, and Charlotte’s, returns to normal as soon as possible and they are back where they belong – on the ice playing with us.