Two teams for the ICA played Ardrossan Castle at Greenacres last night in the oldest international fixture in curling – it has been played – on and off – since 1861.

The Irish team of Martin Sutherland (skip) Carolyn Hibberd, Marie O’Kane and Clare MacCormick (Lead) defeated the Ardrossan Castle side of Gordon Christie, Donnie Shedden, Bill Stevely and Angus Dodds  by 13 shots to 3. The game seemed closer than that but our side were always able to get their stones in the right positions on very swinging ice where weight was crucial.

The other ICA team of Neil Fyfe, Christine Furey, Alan Mitchell and Erin Furey had a much closer tussle against Frazer Erskine , and C ,K, and G Millen.

This  was a game of two halves with the Irish being 4-0 down after four ends.  They fought back to level the game at 4 all but a brilliant  last shot by skip Frazer swung the game Ardrossan’s way with the final score standing at 4- 7.  Overall the winners of the Belfast Medal Trophy are the Irish Curling Association. 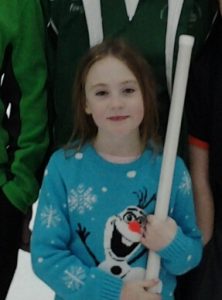 The player of the match, which was agreed by everyone, was young Erin Furey.  At 11 years of age it was thought that she is the youngest winner of the oldest curling international fixture in the world.   Also the youngest Irish player to have taken part in an International match.  Our lucky little leprechaun has been booked for next year’s fixture!