Team Ireland ran into a very good Swedish team today in their first game at the World Mixed Championships in Kazan, Russia. The Swedes took control in the second end after a blanked first end with the Green Team struggling to get the pace of the lightning fast ice. A heavy draw against two coughed up another single in the third but a nicely controlled double by Bill in the 4th got the team on the board. A great freeze by the skipper in the next prevented a big end with the Swedes lying well when their skip failed to remove our stone to allow us to steal a single. After this solid start it was frustrating to allow a big end of 3 in the next and even more so to end the game losing a three against the hammer. All in all we were pleased to get on the ice and we will take the lessons forward to the England game tomorrow morning. Thanks for all of the good luck messages. 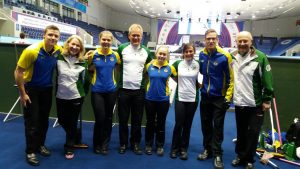