Team Ireland took on the Vancouver based Brazilians in their third game and right from the outset started to put their opposition under pressure by getting stones in much better places than in either of the first two games. We picked up three in each of the first two ends before Brazil opened their account with a single. A further three after an angled raise tap by the skip to take out the Brazilians shot stone gave us a 9-1 lead at the 4 end break. Somewhat inevitably, concentration wavered a little in the fifth and sixth ends to allow Brazil to score a 2 and steal a single in the sixth. We played a great 7th end and when Bill removed the Brazilian counter with his last to score 4, handshakes were offered. A great sigh of relief to get a win under our belts after the earlier disappointment sees the team in better spirits. Tour of the city this morning before the 8pm game against Hungary. 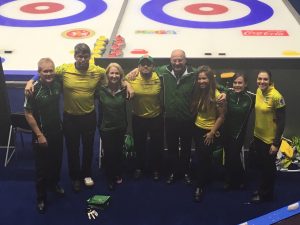