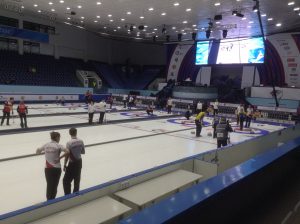 Team Ireland took to the ice at 8pm last night for their only game of the day against the Hungarians who on paper at least looked a pretty strong team – and so it proved. Having given up the hammer from the LSD, we then compounded this by once again struggling with the weight on probably the fastest sheet we have played on so far (and the fastest I have ever experienced). Consequently we gave up a 4 and were on the back foot for the remainder of the game. 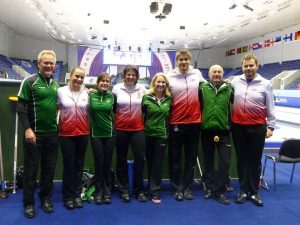 Hungary rarely missed a shot but we hung in after losing a further 2 in the 2nd and played some better shots but it’s fair to say that we were not allowed a look in as the opposition removed any opportunity of multiple scoring in a professional display. I would think they will go a long way in this competition. No excuses really; we can’t let a team such as Hungary get an early big lead as the standard of their play along with many others in this tournament is excellent. We still have a chance to qualify by winning our last two games and relying on some other results going our way so still plenty to go at. A day off today (watching SWE v ENG as I write this) and then up and at Finland tomorrow at 1200 MSK time.