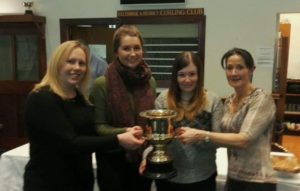 A fantastic performance from an ICA ladies team at the weekend  saw them win the prestigious Haggis at Greenacres.

Team member Ailsa Anderson reports: ” The Irish ladies once again took part in the Haggis bonspiel at Greenacres and hoped to improve upon their low road success in 2016. A team of Jacqui Barr, Jen Ward, Alison Fyfe and Ailsa Anderson played their first game against local team, Drew Gemmell. The ice was particularly tricky with both teams struggling at the beginning of the game to get used to the conditions. However, following a slow start the ladies managed to secure a win (7-4). In a repeat of 2016, the ladies played the Irish mens team in the second game. As always, a “friendly” rivalry was had and ultimately the “friendly” result was a peel (7-7). Both teams were then subject to the torment of stats from Coach, Martin Sutherland, before dinner could be served.

“The following morning feeling refreshed the ladies took on Jack Steven, whose team included Alison and Ross Barr. Despite Team Steven slowly edging in front, the ladies were able to secure a few stolen ends and the score was close going into the last. The ladies were well placed for the steal however a hit from the opposing skip’s last stone meant the ladies could only steal one and another peeled game.

“The accumulation of ends meant the ladies narrowly qualified for the High Road coming second in their section. Next they played Team John Summers in the High Road semi-final. The ladies (assisted by Coach) dominated the game and won the game 11-2 after 6 ends.

“So, the High Road final awaited. Fortunately, the ladies were joined by super sub, Charlotte Tierney, who had patiently waited all weekend for a game. The Ladies were faced against Garry Coombs and his Welsh counterparts who had beaten Team Steven (whom the girls had played earlier) in the other High Road semi. After a relatively slow start, the ladies were 4-0 down going into the 3rd. However, a score of 3 and a steal of 1 levelled the score. The ladies stepped up their game and eventually ran the Welsh men out of stones in the 8th end, securing the win 8-5.

“A great weekend’s work and a major confidence boost for the ladies ahead of the European C-Division in May. Thank you must go to all the ICA members who came out to support the ladies during the course of the weekend.”