Both the men’s and women’s senior squads got a run out at the  Kinross Over 40s prior to heading Canada for the World Senior Championships in April. 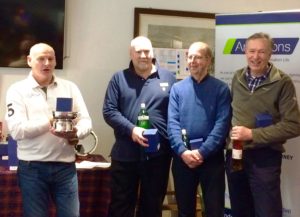 Peter Wilson, who skipped Ireland to world senior bronze last year, has formed a new team this season with the bulk of the gold medal senior winners from 2012 – Johnjo Kenny, Bill Gray, David Whyte and David Hume – in it. Unfortunately Bill injured his leg and couldn’t play last weekend so David Hume played at lead. The team finished as the ‘middle road’ winners with just one loss in five games, and that was due to an unfortunate pick-up with Peter’s last stone of the game drawing for the win against the eventual winners.

The ladies played four games, winning two and losing two, and were pleased with their performance overall. 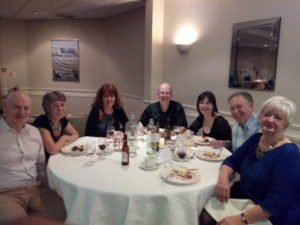 It was a brilliant weekend socially and thanks go to the organising committee, including our very own Johnjo, for working so hard to make sure everything was spot on for the competitors to curl hard on the ice and party hard off it.