It was team spirit that won the ICA players their second consecutive triple crown in the Four Nations at Greenaces. Every player that stepped on the ice to curl for Ireland made a contribution to the final WIN-WIN-WIN posted up on the screens around the ice rink. Some games were close, some games were not so close, both for and against the Irish, but everyone hung in there and made every effort to get as many shots counting as they could.

The Saturday games saw Ireland men and woman lose to Scotland in two very close games.Then two mixed teams got the better of Wales in the second session. The third session saw two more mixed teams face the English. One narrow win and one defeat left us seven shots adrift in that contest and four behind Scotland, but 14 up on Wales at the end of play.

After the Saturday night dinner and dancing….and some alcoholic refreshments for a few of us……… it was the ungodly hour of 9 o’ clock on Sunday morning when we returned to  battle.

It was the mixed teams that surged Ireland ahead of Scotland for the Marshall Millennium Trophy with two wins taking us ten shots clear at 31-21. 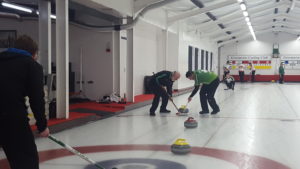 Then the men and women faced the Welsh through in the ice box on E and F. The men struggled but fought hard to the last stone while the ladies had a big win to make sure that Ireland retained the Meikle Trophy 40-21.

As is often the case, the tussle with England for the Turnbull Trophy was epic. Ireland were seven shots behind when David Whyte and his team of lead Nathan Furey, second Eoin McCrossan and third Arran Cameron faced John Brown’s England in the men’s game on C while Alison Fyfe skipped Clare McCormick, Jen Ward and Louise Kerr against Judith Dixon’s English ladies team on D. The men got a good start with a five but the women got a **** start, losing a three. However, the ladies ground it out end after end, with Alison saving the day at the sixth end with a magnificent tap up round a guard to save Ireland losing a shed-load of shots. With the men creeping up the scoreboard, Ireland were getting close to the magic total of eight shots up over both games.

The last end was pure drama. Peels with last stone, the women played a beezer of an end, Jen made a cracker to peel two guards with one stone, and the main aim to keep the front clear for our super-skip was achieved, with the added bonus of Irish stones peppering the house. With her last stone, English skip Judith made an under pressure draw  to lie shot in the back four foot.

Alison then elected to play a hack weight tap back on the English shot. She glided out of the hack and as her stone made it’s way down towards the bar end we knew it needed to swing…..it was hanging out…..then, at last, it stared to draw, but would it finish in time? It sailed into the house and clipped the edge of another Irish stone, rolling gently off it, ending up just touching the button as first shot,  giving the Irish girlies a hard-fought 6-5 win. 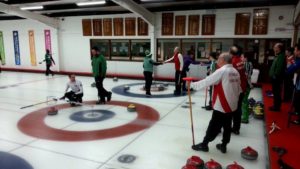 The measure to decide the winner on the Turnbull Trophy.

All heads then swung round to sheet C…… the men’s game next door….. where a  measure had been called for to see who was first shot in their last end. Time seemed to stand still as the measure spun slowly round……..phew, it was Ireland’s. Relief and joy for Ireland but agony for England. Our men had won 10-3,  seven up,  snatching the Turnbull Trophy back out of England’s grasp at the death by one shot –  27 to 26..

What a blast the Four Nations is. Roll on January 2018 when Ireland will host it at Stranraer Ice Rink from the 19th to the 21st.  This will be a first for Stranraer and, according to John Brown, who knows these things, the first time a Four Nations has been held at a four-sheeter rink.

On a personal note as the current ICA President,  I am immensely proud of what our small band of curlers achieved at the weekend. You are all stars! But, no resting on laurels teammates…..the triple triple is our next target. Go away and prepare yourselves for 4N2018.

1 thought on “Team spirit shines through”