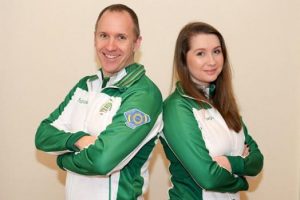 Ireland’s representatives at the World Mixed Doubles Championships in Lethbridge, Alberta, Canada, are the father and daughter combination of Neil and Alison Fyfe.  Eoin McCrossan is also traveling  to Canada with the Fyfes as their coach/team manager.

Neil and Alison gained one Olympic qualification point for Ireland at last year’s world championships, finishing 12th in the WCF rankings. If they can battle their way up to 7th this time round, they would automatically qualify Ireland for the Winter Olympics in PyeongChang, South Korea, next February.

This is their draw: