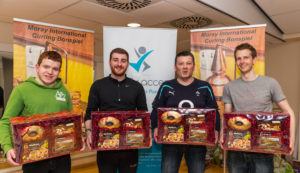 2017 Irish Men’s Champions James Russell, Craig Whyte and Eoin McCrossan were joined by super sub Steve Callan as they won 6 of their 7 games to take 1st prize by the slimmest of margins.

A superbly organised weekend of curling, fun and friendship was enjoyed by several ICA members with good performances put in both on and off the ice by Team Kenny (JJ Kenny, Ailsa Anderson, Jen Ward, Gillian Russell) as well as Team Foxglide (including Alan Mitchell, Alison Barr and Ross Barr).

After some strong showings on Friday and Saturday, and the traditional Saturday night disco (#Timewarp) the final game saw Team Foxglide face Team Paddy Power as the two top ranked rinks. As the last game on the ice, Team Paddy Power needed to steal the last end to seal the title. Team Foxglide attempted a triple takeout to score 2 points but the stone overcurled, Paddy Power stole the end to take an 8-2 victory and secure the title.

Highlight of Paddy Powers weekend was coming back from 5 down after 1 end to beat an experienced Finnish side 7-6.