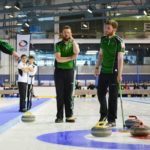 The Mens team played Spain 🇪🇸 in the 1v2 and lost by smallest of margins. They then played France 🇫🇷 for the Silver medal in another hard fought game, but lost in the last end. So they go home with a Broze medal 🥉, but not the promotion to the B league, they were hoping for. 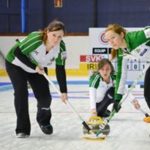 The Ladies had a great competition but lost their 3v4 game to Slovakia 🇸🇰.

Overall it was an amazing double Gold for Spain 🇪🇸.