The Senior Men – Johnjo, Bill, Neil, David W and David H were competing in the Over 40’s competition in Kinross this weekend. Having come through the Schenkel unscathed with three wins from three, they then comfortably won their semi-final before falling at the last hurdle to the Musketeers. 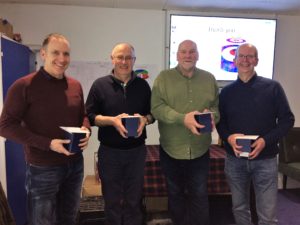 The final started close but was not the most exciting as the ice was very straight. As the game developed the latter ends became more interesting with more stones in play but just a couple of shots which didn’t quite come off was the difference between the teams. The men are pictured with their High Road runner up prize.