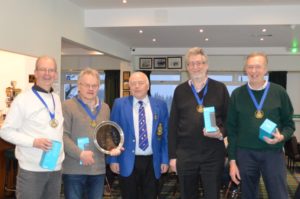 PJ Wilson, David Whyte, David Hume from the ICA plus Jim Stirling were crowned the Masters champions at Greenacres last weekend. After taking eight points from the five game round-robin, including a last end victory over former Scottish champion skip Kenny Horton, the team won their semi-final after only five ends. A three in the first end in the final was a good start to an eventual 7-5 victory over Jim Stevenson, Robin Aitken, Jim Taylor and Douglas Rodger.

The proud skip said afterwards: “My team were just brilliant. I wasn’t too bad either.”