Ireland will be represented at the World Mixed Doubles Curling Championships in Östersund, Sweden, April 21-28, by Eoin McCrossan and Jen Ward.

The team are hoping to boost Ireland’s ranking up from 23 into the top 12 to gain Olympic qualification as part of the Irish Curling Association’s strategy to have representation in the Olympic Mixed Doubles in Beijing in 2022. Eoin and Jen won the Irish Mixed Doubles Championships in December 2017 and have been putting in hours of practice on the ice ahead of their debut in the world championships, although both have represented Ireland in International competition.

Let’s find out a bit more about both of them, beginning with Eoin: 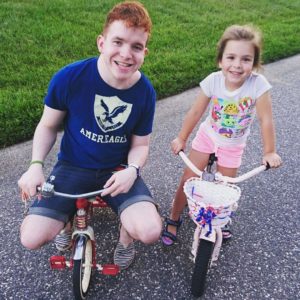 Name – Eoin McCrossan
Age – 24
Occupation – Competitions Coordinator, Scottish Curling
Three things you really like? – Napping, gin, being on commentary
Three things that really annoy you? – Open mouthed chewing, selfishness, ill-considered rules
Three things from your ‘bucket list’ – Making a nominated triple (on the out turn), learn how to drive, go to Eurovision.
What was the last film you saw? Ready Player One
And the last book you read? ‘Curl to Win’ by Russ Howard
Give us a playlist of five of your favourite songs (and artists) –
* Boy in the Bubble – Paul Simon
* Fairytale – Alexander Rybak
* Big Yellow Taxi – Joni Mitchell
* Africa – Toto
* Fox on the run – Sweet
And one song you never want to hear again? – What Does the Fox Say – Ylvis
What would be your specialist subject on Mastermind? – 2017-18 Irish Curling Champions
What’s your favourite meal? 20 Nugget Sharebox (not to share)
Washed down by? Gin (and tonic I suppose)
Tell us something about yourself that will surprise people? I can’t actually Irish dance.
You can save one prized possession. What is it? My curling shoes (they have my name on them!)
What keeps you awake at night? Last minute competition withdrawals
What’s the best piece of advice you’ve ever been given? – “The best thing we can learn is how to fail.”