The Irish Mixed team are either at, or nearly at, their base camp in Kelowna, British Columbia, ahead of the World Mixed Curling Championship starting on Saturday. 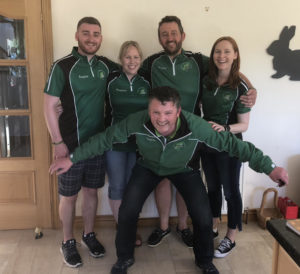 James, Ailsa, Arran and Katie with coach Steve in front.

The team of James Russell, Ailsa Anderson, Arran Cameron, Katie Kerr and coach Steve Callan will start on Saturday evening with a game against Australia. They then face Switzerland, Brazil, The Netherlands, Russia, USA, Finland and Denmark.

Skip James Russell said: ” Hello members and fans. Firstly, I would like to thank everyone for their kind words and support, with special thanks going to those of you who have helped us out with our preparations for the World Mixed in Kelowna. Myself, Ailsa, Arran, and Coach Callan have been working hard over the start of the season both on our curling and team building at the new curling academy in Stirling, Greenacres, and Kinross. While super lead Katie Kerr has been travelling across the United States on her free weekends to practice tick shots. Glamorous locations include Baltimore, Phoenix, and Ice Station Valencia.
“Arran and Steve were sent out earlier than everyone else in order to scout out the local gym scene so the team can relax between games and I have it on good authority that that is exactly what they have been doing. The ‘Vice on the Ice’, Ailsa Anderson, arrived in Canada on Wednesday  and rumour has it that she has been sitting in an ice bath since in order to be acclimatised to any conditions during the competition. I am currently sitting in Calgary Airport awaiting my connection to Kelowna, wondering if I will be able to convince the rest of the team that pizza is the ideal food for competition. Katie Kerr for once has the shortest distance to travel to get to the championships and is celebrating this by arriving last. 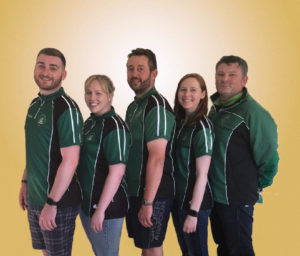 “For all of us it will be our first world championships and we could not be more proud to do it representing Ireland. Shoulder to shoulder we will stand and hopefully we will make you all proud.
“Finally, as many of you know we are the first Irish team competing since the passing of our friend and founding member Tony Tierney. We would like to dedicate our time at the worlds to Tony as our way of thanking him for all he has done for the ICA. We would also like to give our deepest condolences to Charlotte and Tony’s family. May he rest in peace.”