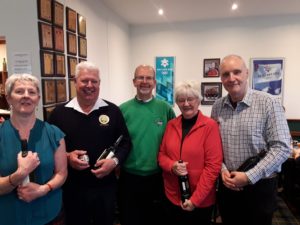 Welcome to the new season and congratulation to John Graham’s team who took the prizes at the ICA Opening Bonspiel at Greenacres Ice Rink.

A total of six rinks took part and before the players took to the ice a minutes silence was held in in memory of Tony Tierney.

Neil Fyfe beat Marie O’Kane 8-2
Bill Gray beat James Russell 10-2
John Graham beat David Whyte 12-2 ( no respect for the Pres!)
President David Whyte said: “Remember to get your names down for  the Fyfe Trophy on 20 October and the next Bonspiel on 11 November and finally, we all wish James and team well in the Mixed at Kelowna in Canada.”