The dates and times for the best-of-five mens senior playdown for the right to represent Ireland at the World Senior Curling Championship in Fredericton, New Brunswick, Canada next April have now been confirmed:

The team that won the world senior curling championships for Ireland last April lost in the quarter-finals of the recent Edinburgh International Seniors competition at Murrayfield ice rink.

“We lost in the QF to Gary McFarlane.

“Had a good weekend. Beat David Rutherford on Friday and then lost to Keith Prentice.

Played David Clydesdale on the Saturday morning and had a cracking game. JJ went off after four ends due to bad knee. We were peels going down the last with the hammer. David Clydesdale played a great draw to the button with his last and I missed the ******. Lost by one. Then needed to beat Andy McGlynn convincingly to qualify. Was 10-0 up after six ends (JJ sitting out; yours truly skipping) so that was enough to do the job.

“Played GMac in QF on Sunday morning. Ice like lightening and we didn’t react well to that at all. Went 5-1 down after five, lost a one in the sixth end, got two back in the seventh and ran out of stones in the last to lose 6-3.

“Disappointing not to get to the semi at least although Gary and his team playing pretty well. We still thought we could have beaten them if we had brought anything like our A game to the contest but not to be.” 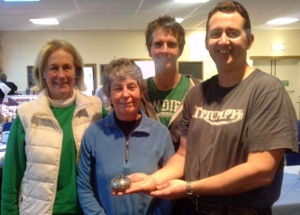 After the Irish team won the gold medal in the World senior Curling Championship at Tårnby, Denmark in April 2012, Radio Ulster interviews one of the team.

Johnjo Kenny’s team finished the round robin 2nd in their group with 4 wins, and 1 defeats, but lost out in the quarter finals game to Per Carlsen (Sweden) 9-5.

Marie O’Kane’s team finished the round robin 4th in their group with 2 wins and 3 defeats.

For full results and some great photos visit the Greenacres website.

The game started well for the Irish holding the Swedes to a single in the first, scoring a double themselves in the second and repeating the pattern in the third and fourth ends to lead 4-2 halfway through the contest.

Carlsen scored a two in the next and then the Kenny team gave up a stolen 2 in the 6th end to go 2 shots down. The guys failed to react quickly to changing ice conditions and lost a bit of concentration and although had the chance to keep the opposition to a steal of one, a couple of misplaced shots allowed the Swede to score 2.

The Irish replied with a single in the next and were well placed to steal in the last end but again failed to nail a couple of draws to the button (after the Swedes fluked a shot to the back of the T clearing a guard) and ran out of stones – hence the score of 3 against.

This was a gutting defeat for the World Champions who felt that they had the momentum to go all the way in this competition but on reflection, the team were very proud of the run of victories they have produced since forming the quintet prior to the Worlds.

Team took to the ice without hard working skip JJ in the clash with the Dutch. Team Ireland started well with a 2 in the first followed by a superbly engineered steal of 5 to lead 7-0 after 2 ends.

The game progressed with Team Ireland continuing to control the game. The Dutch scored a two in the third followed by Ireland taking a single and then a stolen single to lead 9-3-and then traded singles with the hammer to run out 10-4 winners. It was an excellent performance from the team but skip Bill Gray commented that the much improved game by lead David Hume was an important factor in the win.

On to the eagerly anticipated clash with former World Champion Keith Prentice on Friday morning, which was a must win game for the current World Champs to enable them to continue in the competition.

Team Prentice started with a single and a steal of one in the second to take an early lead. In the third end, David Whyte played an excellent freeze to lie shot behind guards in a complicated situation and after a few more stones, JJ had a peal weight take out shot to roll and tap the Prentice stone lying in second shot to score two and played it perfectly moving the opposition stone the required 2 inches.

This gave the team the confidence to go after a steal in the next which, after a draw by 3rd Bill Gray behind guards they managed to do with some excellent guard play.

The teams traded singles with the hammer, with Keith Prentice failing to blank the 7th end giving the Irish boys the hammer in the last.

With two stones left to play, Ireland were only lying second shot with a Prentice guard out front. The Scots tried to draw another stone down to prevent an angled tap by JJ but the shot over curled and opened up the front of the house. It was left to JJ to play a half stone takeout to score one for the victory. The Big Man nailed it with the minimum of fuss to win the game. The Irish boys were delighted with the win which they felt owed much to their steely determination and play under pressure. When asked for a quote the skip said “on to the next game!!”

Ireland 7 Italy 6
The Irish men’s team were up against Italy last night after the schedule of play was rearranged inthe European Senior Invitation at Greenacres Ice Rink. Although the team struggled to start with the ice but they kept themselves in the game and a count of four and a steal of one should have heralded a comfortable win but the Italians came back in the last two ends scoring three shots to make the final score a rather tight  8-7 win for the Irish.
Afterwards, skip Johnjo Kenny, returning to the team after being absent for the earlier game, said: “What is it about these teams that we can’t put them away?”
In the ladies section Marie O’Kane’s seniors ladies team went down 7-6 last night to Margita Matuskovicova from Slovakia after losing earlier in the day to Scotland’s Barbara Watt.