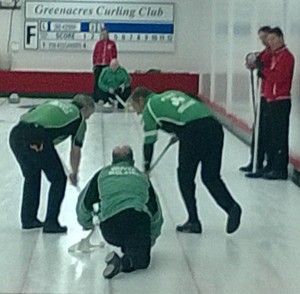 Ireland beat the Finns, former winners and runners-up of this competition, 8 -1 this afternoon.

The team lined up thus: Johnjo, Neil, David and Tony.

A comprehensive win and seven ends won lifts the team up the table. One round robin game against Russia to go tomorrow where a win would see the team qualify for the quarter-finals. 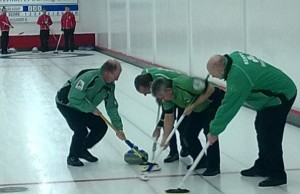 The Irlish boys beat former Scottish champ Graeme Adam and his team 6-3 in this morning’s draw in the European Senior Inviation at Greenacres.

The team line-up was Johnjo, Bill, David and Neil.

All the team have commented that they played well and this was a “solid performance” and they were “comfortable winners”.

Ireland peeled five all with Norlund’s Swedish team. One up going down the last they kept the Swedes to a single.

Skip Bill said: “A better game and team played a very good second half to lead 5-4 after seven ends. We were unlucky not to shut them out in the last end but a peel is better than a loss.”

Christine Stewart reports from the rink-side: “Bernhard Attinger from Switzerland proved to be too strong for Ireland’s John Jo Kenny, he had a two shot lead after four and went on to dominate the second half of the game stealing two in end five and a single in the sixth for a five shot lead. Team Kenny managed singles in the last two ends but the game went to Attinger 6/3.”

If you want to go along as cheer on the boys in the European Senior Invitation Competition at Greenacres, their draw time as are follows:

The ‘Famous Five’ – Johnjo Kenny, Bill Gray, David Whyte, Tony Tierney and David Hume became the ‘Super Six’ earlier this year when Neil Fyfe joined the team, having previously played second stones for Peter Wilson at the 2013 World Senior Championships in Fredericton last April.
This six-man squad will be using a rotation system of play for the championships as both work commitments and David Hume being in New Zealand just now means not all the team can play all the games.
Johnjo said: “Its our first time together on the ice this season, we have not even managed a practice as yet. Unfortunately due to unavoidable work commitments I will be missing a few games and we will be rotating our squad throughout giving new squad member Neil Fyfe games in every position. We seem to have an especially tough section so it will be a nice start to the season for us and no doubt highlight the areas we need to work on in the coming weeks. As usual we are all looking forward to meeting up again and getting onto the ice. Win, lose or draw we will have some fun this week.“
The team face a tough draw:
Game 1 . Bernard Attiner Switzerland. Swiss senior champs 2012 etc etc
Game 2  Karl Nordlund Sweden  Current Swedish senior champions and former world bronze medallists
Game 3  Graeme Adam Former Scottish mens and seniors champion
Game 4 Timo Kauste Finland  (Euro senior invitation winners 2011 and runner-up 2012)
Game 5 Russia  Russian Champions
The full draw will appear here shortly……

So, first off I’ll apologise for not keeping the match reports up-to-date. When you are playing upwards of 20 slow ends in a day it can be tough to find the time to play; eat; sleep; tend to personal matters; have a good fight over how you are playing; and then write the whole experience up in a semi-coherent manner.

Rather than retrospectively fill in the match report blanks, I thought I would wrap up the European campaign for this year with a summary describing what went well and what went badly. And next year – when we try this again – we’ll probably dig out this entry just to make sure that the lessons are properly remembered.

We finished up the tournament fairly low in the rankings but on the positive side, we won the draw shot challenge quite comfortably with Craig proving that he had the steadiest draw of anyone. He can even rightly point to the sweepers for a lax first effort when we were still adjusting to the speed of the ice. We will make better use of our drawing ability in games to come.

But if there was one real positive aspect to our play it is that we are a team that does not give up as evidenced by the fact that we came back in every match where we were down, sometimes by quite a large number of shots and basically took every game to the last shot of the last end. As a result we finished the tournament with no team thinking they had much, if any, edge over us.

On the not so good side, we are still a wee bit slow on the ice, more so when we are playing other slow teams. We managed to seriously annoy the referees on a couple of occasions (against Serbia and Romania) where the games really dragged. But interestingly, I think the slowest game of the whole tournament was the silver/bronze game between Serbia and Romania. We knew about this feature of our play before the tournament but we probably need to work on it again.

Back to the positive. I got the impression that we were one of the best teams in the tournament when we were required to steal an end. Conversely, I think we were one of the worst when it came to hammer efficiency. This got to the stage where I was happy stealing ends as it meant we didn’t have deal with our issue of having the hammer. I’ll probably work out the statistics for this at some point as it’s probably the major issue of our game for us to address. That, and the fact that we have difficulty bullying lesser sides.

I should perhaps say that all the teams in the tournament were quite capable of drawing the button when required and we shouldn’t have been surprised when they demonstrated said ability against us. Additionally, I would hazard a guess that all the teams we played were actually more motivated playing against us than other opposition. Where was the love?

So, results wise, not the best of tournaments but I came away from it thinking that there was a lot more potential in our play. Any one of half a dozen improvements in our game would have seen us in the medals. For instance, not losing a big end after winning a big end would have made our life so much easier.

I watched a number of ends of curling over the course of the week and quite a few of them had exceptional shots in them but the one end I will still be remembering next year when all else is forgotten was the last end against the Serbians. A four was needed to take the game into an extra end and to be honest if we’d shaken at this point I don’t think anyone would have been overly surprised. After six shots the Irish team had six perfect shots lined up, a long guard, a short guard and four in the house. Each shot was perfectly bisected by the centreline. We had the shot for the four and the split on the short guard was only very narrowly missed. This was the perfect demonstration of how we can play. Every other team saw it and i’m sure they’ll still be remembering it next year as well.

The Ireland team playing in the mens European C league in Taarnby won their final game 9-4 against Iceland yesterday afternoon.

It’s Friday morning and the news from Taarnby is not good. The Irish men’s team, fighting for a place at the European B league in Stavanger, Norway at the end of next month lost a crucial game last night to Serbia by one shot – 9-8.

John F will have a detailed report in due course but it means there game against ICELAND today is meaningless. Just playing for pride.

Topping the table are Wales and Romania on five points followed by Slovenia and Serbia on four points.

For the dinosaurs out there that are not on Facebook  – me for a kick-off – here is an update on the Irish boys scores from the ECCC:

The team need to be in the top four so must win games against Serbia tonight and Israel (sorry Iceland) tomorrow lunchtime coming up.