They were drawn against Graeme Adam’s Greenacres rink and after a nip and tuck game which included the guys narrowly missing out on a big 4 in the 5th end, it came down to the  last two ends.

At the seventh, 1 down, JJ had the option of drawing for a two or taking his last stone out for a blank to retain the hammer. A draw for two was the decision.

In the last end – one up – Neil’s first stone picked up which was a bad sign for later. After a few stones Adam lay shot and guarded. JJ drew down to lie shot whereupon Graeme Adam played an excellent raise to pick out Johnjo’s  stone. Attempting to play the same shot, the unfortunate Irish Skip suffered a pick-up to leave the Greenacres team with a free draw to score two and win. They tried hard to redress the balance but Adam’s final stone stopped just in time (by just a couple of inches) to break Irish hearts!!

This was a particularly gutting way for the guys to go out but there were huge positives to take away from the weekend.

Johnjo’s men marched into the quarter final with another emphatic victory, this time against Ken Watson’s predominantly Stirling based rink.  The Irishmen went into an early lead and extended their advantage comfortably to end 2nd in their section.

Quarter final match up is still to be confirmed but the boys are happy that they are playing well and ready for a 9am start on Sunday.

The “lads” continued their quest for glory in the third game of the 4 game Schenkel at the Edinburgh Seniors International in Murrayfield.
With the line-up from the last game retained; Neil, David W, Bill and JJ, they took on the Braehead rink of Ian Gillespie.
The Irish moved ahead early in the game to go to 7-1 up after 4 ends and then controlled the game to run out 10-5 winners gaining 5 ends. This puts them in 3rd place in the group with one round robin game to go. A win in the 4th game would see them qualify for the quarter finals while a loss would put them in the melting pot for qualification. Skip JJ was quoted as saying ‘we’re finding a bit of rhythm now so hopefully we can maintain it and progress.’
Next game at 2.15 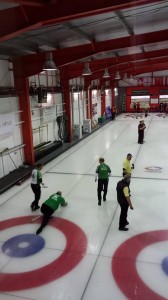 The 2012 mens world senior champions will be representing Ireland in the Edinburgh International Seniors Championships from  Friday, November 22 to Sunday, November 24, at Murrayfield Ice Rink. 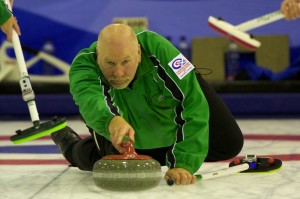 The team, skipped by Johnjo Kenny, are in Section A along with rinks skipped by Robin Aitken, Gary Macfarlane, Ken Watson, Ian Gillespie, John Summers, Alastair Smith and Alan Durno.

In Section B the line up is Norman Brown, Russ Armstrong (who some of us will remember playing for the USA at the Silver Broom in the Kelvin Hall in 1985), John Dignan, Jim Stirling, Keith Prentice, Michael Sutherland, Graeme Adam and Archie Craig.

The team’s first game is against well-known English senior player John Summers and his team at 12.30pm on Friday, with their next draw at 5.45pm. Saturday sees them on the ice at 9am and 2.15pm. The quarter finals are at 9am on the Sunday with the semis at 12 noon and the final at 3pm.

Skip Johnjo spoke exclusively to the chief ICA blogger ahead of the competition and answered a few searching questions:

LK – Who do you see as the danger teams at Murrayfield this weekend?
JJK –  All of them!  I never look past the first game in the draw and that will be difficult enough against John Summers’ England team.
LK – Who will  be playing this time and the advantages (and disadvantages – if there are any!) of a 6-man squad?
JJK – The advantage is that we can sometimes get a team on the ice! We have only had 5 scheduled games this season and have never had 6 to choose from. I missed 3 games with work commitments at the European Invitation, David Hume is just back from white water rafting round the southern hemisphere and this week Tony (Tierney) is committed elsewhere. The 6 man squad came about due to a number of factors and I think it is working well for us. Neil is enjoying our laid back banter so far (I think) so no disadvantages so far!
LK – Any plans for further competition or training session between the end of the Edinburgh International and the Irish Senior playdowns in January?
JJK – No competitions but hopefully practice…as much as possible!. Everything at this point of the season is really practice. We are trying to give Neil (Fyfe) as many games as possible as the newbie on the team and David Hume will be given the opportunity to find his ice “legs” again in Edinburgh. Emails and spreadsheets have been flying through cyber space for the past few weeks as we try and nail down some practice time, not with any real degree of success so far.
LK – What are your goals this week?
JJK – We are hoping (as always) that we will be a bit better than we were last time out and will target getting through to Sunday. It has to be said “schenkel” is not my preferred system of play but if we can negotiate our way to the knockout phase it will be a worthwhile exercise. We enjoy the pressure of knock-out games. 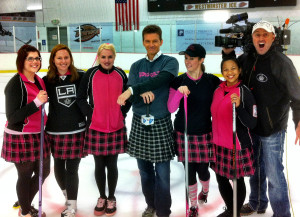 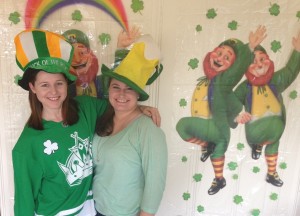 The launch of a male curling calendar in Canada , see here:

made me think about raising funds for the ICA by launching our own version.

Anyone interested in revealing their well hidden six pack for a good cause? No Shillelagh please. There must be 12 decent physiques out there surely……

Send your vital statistics and photos to either Christine or Louise and remember, the editor’s decision is final!

Ireland were beaten by Russia 7 – 5 this morning and will not be going through to the quarter finals. 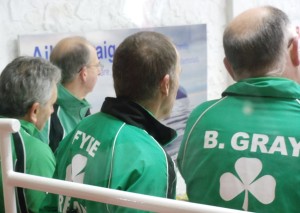 Ultimately after the score lying 5 all but Russia with the hammer in the final end, the team looked on as Sergey Korolenko took out Bill’s last stone to take 2 for the win.