All ICA members I’m sure will want to wish PJ Wilson a long and happy retirement.

Our immediate past Pres left the employment of Dumfries & Galloway Council today after over 40 years looking after the roads network.

You can see from these two photos what spending that length of time filling in potholes does to you.

Anyway, we can expect to see him using the free bus services for pensioners to attend ICA bonspiels from now on. Can anyone tell him where the nearest bus stop to Greenacres is? 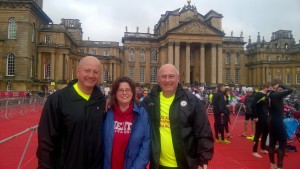 The Three Shades of Gray

Just a quick postscript to the Blenheim Palace Triathlon that I participated in this summer.
A huge thank you to everyone who supported us both by message and donation. The Three Shades of Gray, (my sister Kathy, brother Ian and I) managed to raise over £10,000 in aid of Lymphoma and Leukaemia Reasearch due to the unbelievable generosity of those who donated. 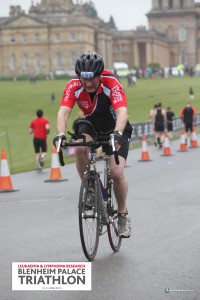 The day was cold and wet which didn’t make for a particularly pleasant experience but the scale of the event was staggering and it was great to be part of it in a stunning location. We managed to finish 194th out of 259 in our race which was pretty good for three novices. I took great heart from the fact that the majority of the cyclists who overtook me (and there were many) were all about half my age!! We have already wondered if we could improve on that next year………….A bit more training required methinks. Watch this space. Now for some sedate games of curling over the winter. 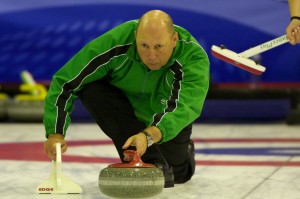 The ICA will hopefully be seeing a bit more of one of our long-standing international curlers when Robin Gray moves back home to Scotland next month to take up a new post in Edinburgh with his employers, The Royal Bank of Scotland.

But the bad news is he has decided to end his Irish international curling career to concentrate on the Scottish Senior Championships in 2016.

During his 15 years as a banking executive in Dublin, the 51-year old  has always kept his curling shoes handy and in 2004 he was part of the first Irish men’s team to compete at international level in the European Championships B League. Since then he has racked up the fine total of 95 caps for his adopted county, with 54 wins and 41 losses. Robin played in the team that famously qualified for Ireland’s first world championships in Lowell, USA in 2006. He was in both teams that played the European Champions at A League level in Garmisch-Partenkirchen in 2005 and Basle in 2006, where he skipped Ireland to a memorable win over Thomas Ulsrud’s high-class Norwegian foursome. He played in the European B Division in Sophia 2004, Fussen 2007, Aberdeen 2009, Champery 2010 and Moscow 2011, winning a gold, silver and bronze medal. Robin also skipped Ireland at two European Mixed Championships, in Erzurum 2012 and  Edinburgh 2013.

Prior to moving to the Emerald Isle he skipped his Greenacres junior team to the Scottish Championships in 1982 going on to win a bronze medal at the World Juniors in Ferdericton, Canada. In 1990 he was Scotland skip at the European Championships in Lillehammer, Norway, where he lost in the final to Sweden by one shot.

Before the removal van arrived,  Robin had time to look back over his Irish curling adventures as well as look forward to getting involved in much more curling action in the near future.

He said: ”Playing for Ireland has been an honour and a blast. It has been said that one day we could write a book about it and I may well do! Hopefully being back in Scotland will allow me to curl far more at club level and get my hand back in, which has been lacking too much when trying to play once a year in the Irish playdowns. Also, I look forward to joining in the domestic Irish bonspiels far more than I have been able to in the past.”

The ICA wish Robin and his family all the very best for their move back home and every success in his new role. 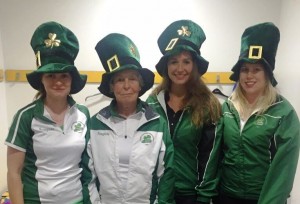 The Irish Ladies team commenced their European C Division warm up by getting together at the Stirling Summer Skins held at The Peak this weekend (31 July – 2 August). After a good but rather unfruitful start against the eventual tournament runners-up, the team of Alison Fyfe, Ailsa Anderson, Hazel Gormley-Leahy and Clare McCormack (Katie Kerr was unavailable due acting commitments in New York) returned with two solid wins on Saturday morning. The final game of the day was a very close affair with some brilliant shots being played, most notably a double takeout and freeze in the fourth end by Skip, Alison. Unfortunately, the opposition took the big money, final end and the win. The Skins were great fun and thoroughly enjoyed by the team. On the whole a good, solid start to the ladies campaign. The ladies wish to thank all of the ICA supporters, including Coach, Martin Sutherland for coming out to cheer on the team.