Neil and Alison Fyfe put in an excellent performance at the Mixed Doubles competition at Dumfries Ice Bowl.

With some of the top teams from Europe in the draw, it was the perfect opportunity for the dad and daughter team to get some practice in ahead of the world championships in Karlstad in April. 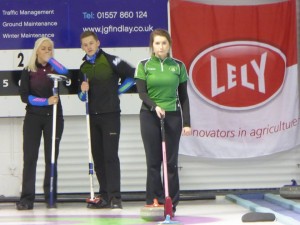 They  played five games winning three of them. In the first round the lost 11-4 to the Swedish pair Noreen/Noreen. They lost their second game to Team Estonia by the same score but then went on a winning streak beating the team from Lithuania 9-7; the Russians Portunova/Gluklov 10-5 and finally, the Scottish MD champs Aitken/ Mouat 7-6.

Unfortunately this was not enough to get them in to the quarter-finals and a sniff of the big money put up by the sponsors for the winners, but it was a solid performance nevertheless.

ICA members were also in action in the Scottish Seniors at Hamilton, but both Robin Gray and Charlotte Tierney went out after the section stages.

Would any of our lady members like to play with Bill Gray and Ross Barr the Brechin and Allcomers Mixed bonspiel at Braehead on Sunday 6 March?

This is a competition won last year by a team of four ICA members – Bill Gray (skip), Margarita Sweeney-Baird, Ross Barr and Jacqui Barr.  Unfortunately Margarita and Jacqui can’t play this year so the boys are looking for two Irish girlies to defend the title.

There was a medal presentation ceremony to our mixed doubles, mens and mens senior Irish Curling Champions at the traditional drinks reception in the North West Castle on Saturday evening. ICA Honorary Member John Burns did the honours. 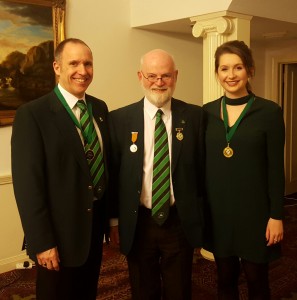 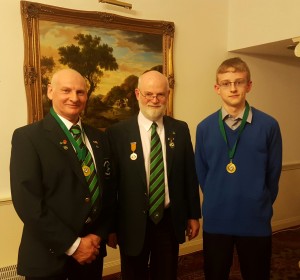 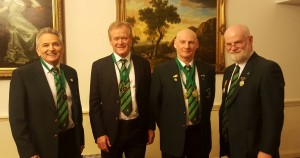 Congratulations to them all and good luck at the Worlds and the European C Division. 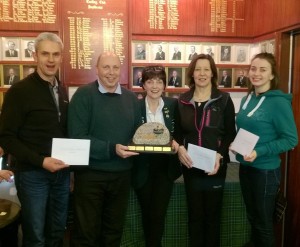 The Irish Curling Association Stranraer weekend was won in style by a rink skipped by Robin Gray with three members of the Cannon family from Wigtown – Christine, Jim and Jenni.

This new team in our favourite weekend remained undefeated throughout the four rounds of the Shenkel system competition to claim the top prize of the granite stone trophy and £25 vouchers for McMillan Hotels. 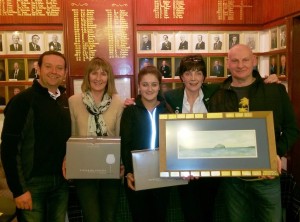 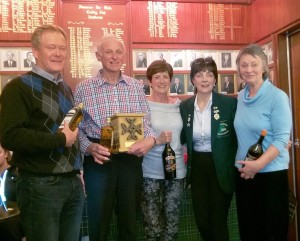 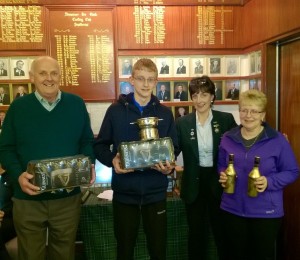 The runners-up in the low road were the local team of Andrew Gilmore, Roberta Warwick, John Gilmore and Diane Gilmore winning cans of Guinness and Irish chocolate liqueur. 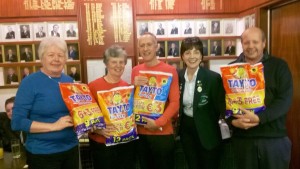 The consolation prize went to the rink of Andy Robinson, Rosemary Griffiths, Alan Griffiths and Rona Griffiths. With any luck Tayto bosses will see the picture and all the free publicity they are getting and decide to sponor the ICA!

The grand raffle on the Saturday evening drinks reception raised £329.10 for ICA funds. Many thanks to all who gave prizes and bought raffle tickets.

Ailsa and her mum also appeared in the Kilmaley Parish magazine, where Irish curling got a big shout out: 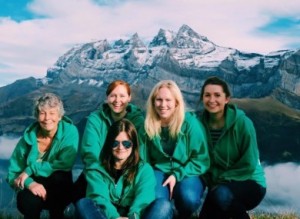 Irish ladies team member Ailsa Anderson recently gave an interview to Irish sports media publication ‘The42’ and it has already been viewed 27,612 times on The42 website!

As much publicity as possible is needed as the team are hoping to raise funds for their European C League trip via:

The times for the Saturday games will run 9am / 11.10am / 1.20pm and 3.30pm. This is to allow time for the ice to be pebbled between sessions. We will try and keep to the original two-hour sessions on the Sunday so we don’t finish too late for those travelling a distance.

The Saturday evening drinks reception will start at 6.45pm in the Prince Phillip Lounge (same as last year) and after the draw for the Sunday morning games has been announced there will be the presentation of Irish Championships medals to the winners of the mixed doubes; mens and mens seniors teams for 2015.

After that will come the grand raffle for ICA funds. Could each team provide a raffle prize please?

Congratulations to PJ Wilson’s Masters’ team who, without PJ, made it to the final of the Masters at Greenacres.

Up at Kinross on Sunday, six rinks of ICA members turned out on the most inhospitable of days to play in the ‘Spring Bonspiel’, should perhaps be renamed the ‘Blizzard Bonspiel’.

The trophy and the wine was won by Bill Gray, Arran Cameron, Margarita Sweeney-Baird and Gillian Russell. Well done to Bill’s rink,  who finished five shots up on the opposition, and finally, a big thank you to to Carolyn Hibberd for organsiing the competition.