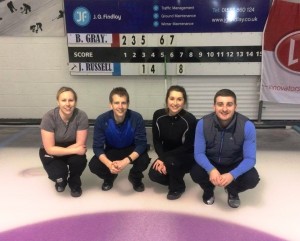 James Russell, Alison Fyfe, Craig Whyte and Ailsa Anderson are the Irish Mixed Champions for 2016 after beating Bill Gray, Margarita Sweeney-Baird, Ross Barr and Jacqui Barr 8-7 this afternoon. The title was sealed by a big three for Team Russell in the last end. This second win meant that the Russell quartet went undefeated throughout the three-team competition, so there was no need for a final game. 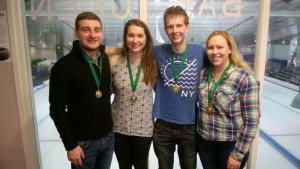 The team with their medals.

Well done to the new champions!