Ireland’s women, sponsored by Kerry Group, go down to second in the table Austria in their last round-robin game, thus ending their C League campaign this year with one win and six defeats.

A loss to top of the table Belarus.

A tight game of blanks and ones went the way of Belarus this morning.

Ireland in third place in the table on 12 points  – same as Bulgaria who have a slightly better DSC.

Super day for the Irish mens team with two wins.

Well done to all four.

Comprehensive win from the boys to keep them sitting second in the table,

The Irish men win in their seventh game at the C league. They now stand in second position with 5 wins, 2 losses and 3 round robin games to go. Keep it going team!

Follow their next game with ‘play by play’ graphics against Romania on Friday 29th April at 7pm UK time on CurlingGeek.com – beats hanging on the linescore. 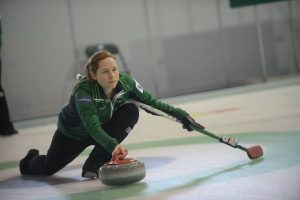 The Irish Ladies team had a very tough start to the day losing in their fifth match of the C league. They are currently ranked 7th with 1 win, 4 losses and 2 games still to play. Keep going Team Anderson!

Follow their next game on Friday 29th April at 3pm UK time against Belarus via linescores. 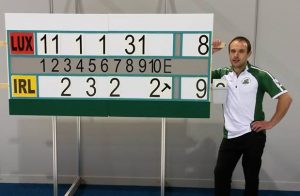 Bob Sherrard with the results

The Irish men win in their sixth game at the C league. They now stand in third position with 4 wins, 2 losses and 4 round robin games to go. Keep it going team!

“Thanks for all the support back home. I know that game may have looked dodgy on curlinggeek but you’ve no idea how hard that game was and our skips stones were funny and weren’t drawing properly. Also Lux tactics mess with your head. They play a crazy game of curling. All the other teams are happy we beat them! We were all completely shattered at the end. Got it all to do again tomorrow…”

Follow their next game with ‘play by play’ graphics against Andorra on Friday 29th April at 11am UK time on CurlingGeek.com – beats hanging on the linescore. 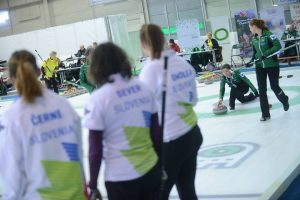 The Irish Ladies team lost  their forth match of the C league. Keep going Team Anderson!

Follow their next game on Friday 29th April at 7am UK time against Spain via linescores. 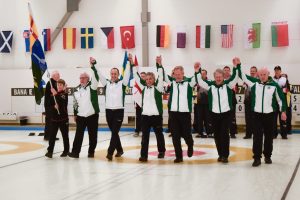 Seniors’ coach Gordon McIntyre has send through his notes from the men’s semi-final against Canada and the bronze medal game against Denmark so we can all find out exactly what happened!.

1st End. – Quick 1st end. Canadian skip Randy Neufeld has to hit for his 2. 0-2
2nd End – Couple of missed hits puts us in bother, have to chase the game now.  Pete having to draw the shot against 2. Sweepers working on  it too early and shot sails through.  0-4
3rd End – Ireland lying 3rd shot, when Pete takes a double for 2.  2-4
4th End – Very defensive by both teams, lots of hit and rolls leaving not a single stone in house. Blank. 2-4
5th End – Game changer when Ireland electing to put stone in house to open up play in the hope that we can steal. Neufeld draws to lie 2. Pete has to follow him and lies shot,
Neufelt goes for the raise and misses, great steal of 1. 3-4
6th End – Stones into house allows Canada the opportunity to draw for 2.  3-6.
7th End – There is nothing in the house for Ireland when  PJ plays, he is facing  3 and guarded,  so peels guard, leaving Canada lying 2. PJ then tries going through a port for double, but not heavy enough, Canada still lying 1 . Pete also comes through the port, but his stone is lying open. Neufeld hits to lie 3. Not too many options for last stone. Going for tap back on outside stone. Just missed out  3-7. Game finished.

Bronze medal game  – winner takes all…….
1st End – Good swinging ice, Pete to draw for 2.  2-0
2nd End – Hit and run end, Pete going for tap back with 1st stone. Danish fourth player Poul Erik Neilsen hits and rolls into the open. Pete going for hit and stick leaving Niesen to follow. Blanked end.   2-0
3rd End – Both teams hitting for positional play, Pete elects to hit and roll, but just goes too far. Neilsen draws for 2.  2-2
4th End –  PJ plays an angled hit and roll to lie shot. But Neilsen plays an excellent raised take out to lie 2. Pete, with his first stone, goes for a tap back, but it was just under weight, 1 shot still against us. Pete going for draw with his second, it has to be into the 4′ and it is.  1 for Ireland.  3-2
5th End –  Lots of good shots being played ( all all behind the tee ) by both teams.
Ireland draw to lie 2, Neilsen  goes for tap back, but plays heavy and runs past. Good steal of 2.   5-2.
6th End – Lots of stones in play. Neilsen tries the hit fora  2 and misses,  so another steal of 1.  6-2.
7th End – Pete is really taking the game to Denmark by putting stones into the house. Ireland lie 1 with Nielsen’s last stone to come. It’s  another steal of 1 and bronze medal!!! 😂😂😂😂😂😂