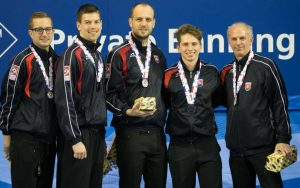 Ireland gained some success at the recent European B League championships in Braehead when ICA member, Alan Mitchell, won a tremendous B league silver medal as coach to the successful Slovakian Men’s team. Not only did the team of Jakub Polák, David Misun, Patrick Kapralik & Juraj Gallo win the silver medal but gained promotion to the European A league for 2017. Congratulations, guys! 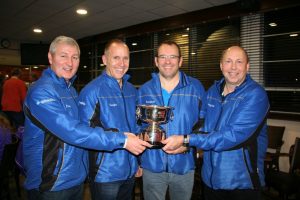 It had looked like the official men’s team – Peter Wilson,  Johnjo Kenny, Bill Gray and David Whyte, might make the final too, but unfortunately they were beaten in the semi by Callum Harvey.

Unfortunately there was no glory for the boys in green this year with both Peter Wilson’s team and Johnjo Kenny’s rink winning two games and losing three.