This event has been cancelled due to COVID.

The next Four Nations event will be organised by Scotland in 2022 – and held in Ayr Ice Rink, Scotland. The national associations for each country compete for seven trophies.

The 2023 Four Nations will be hosted by Ireland.

Ireland competes for the Hugh Meikle Memorial Trophy against Wales, the Turnbull Cup against England, and the Marshall Millenium Trophy against Scotland.

The Four Nations competition is an enjoyable and social weekend tournament between the governing bodies of each of the home nations (England, Ireland, Scotland, and Wales).  It has evolved over a number of years with the first recorded games taking place in the early 1900s.  The tournament is hosted in turn by each of the four nations annually towards the end of January.

Join us in Murrayfield for a social Irish Curling Bonspiel followed by a late lunch.

Individual entries will be sorted into teams.

This fixture has been cancelled due to Covid closing the Stranraer Ice Rink.

Come and say “Hi” to your fellow ICA members from 8pm till late.

Look out for a Zoom link from our secretary, Bill Gray, in your inbox.

Final Date and Location to be confirmed – hopefully we can meet in person.

The Mens team representing Ireland in the European Curling Championships (ECC) C-Division 2021 in Curling Club Trois-Chêne in Geneva, Switzerland on  Sept 12–17, are: 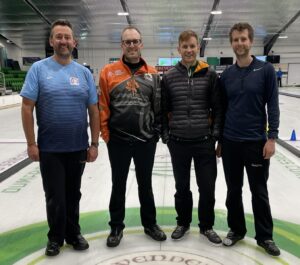 There is no Irish womens team this year.

At the European Curling Championships C-Division , two teams from each gender, are promoted to the EEC B-Division in Lillehammer, Norway on 20-27 November 2021.

If you’re interested in playing in a national championship but don’t have a full team make sure to get your name in.

We have ice booked at Greenacres Ice Rink.

This fixture is subject to change in line with Covid-19 restrictions in place at the time.

Our first ICA event of a new season. We have ice booked at Greenacres Ice Rink.

This fixture is subject to change in line with Covid-19 restrictions in place at the time.

The final deadline for teams interested in all the Irish National Championships: Seniors, Mens, Womens, Mixed and Mixed Doubles.