The bronze, silver and gold medal winners at the Fyfe Trophy

There was an excellent turn-out of ICA members for the Fyfe Trophy at Breahead Ice Rink yesterday, organised by Eoin McCrossan.

Five rinks played a round-robin of three-end games, with a break for lunch between game three and four.

The top three team at the end of the event were:

Neil Fyfe presented most of the medals (bar himself!) and the Fyfe Trophy to the winners. Congratulations to them and thanks to everyone for taking part in this annual test of endurance over 15 ends!

James Russell was testing out the camera settings on his new phone and here are the results…….. 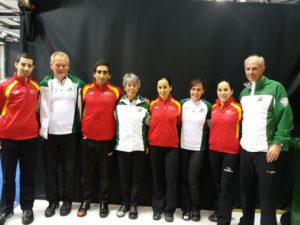 The Irish Mixed Team, playing in the world championships in Champery, Switzerland, finished their round-robin games against two of the strongest team in their group, going down 1-10 to Korea and 0-8 to Spain. Alan, Jacqui, Ross and Clare did their best and finished with a very respectable four win – three loss record, just missing out on a qualification spot. Well done to you all – and coach Alison, now you can relax and enjoy the rest of your stay in the Alps. Another two excellent results for Team Ireland at the World Mixed Championships in Champery.

Having beaten Luxembourg 10-3 they then took down Kazakhstan 7-3 to stand proudly top of their group with four wins and one defeat.

They play Korea tomorrow afternoon. Keep it up team you are doing Ireland proud! Congratulations to Carolyn Hibberd who, as lead in Graeme Adam’s senior mixed team, won the Scottish Mixed Championships at Stranraer this afternoon.

Carolyn and her teammates won a tense final 6-5 after an extra end. AND……she beat her fellow ICA member PJ Wilson in the final!

Well done Carolyn from all of us – very well deserved! Hard lines Peter – your day will come.

Good start for the Irish Mixed team at the world championships in Champery, Switzerland with two wins out of three. The team of Alan Mitchell, Jacqui Davidson, Ross Barr and Clare McCormick beat New Zealand in their first game 7-5, lost their next one to Scotland 2-9 but earlier today took down Denmark 7-5. They play Luxembourg tomorrow afternoon.